This post was updated Nov 16, 2019 to use up to date Serverless CLI commands, simplify the handler code by removing Express, and simplify the approach handling Heroku Postgres credential rotation.

Here’s an approach to connect a Lambda function to Heroku’s managed PostgreSQL service, Heroku Postgres, which offers a free tier. Combined, you’ll get 1M requests and 400,000 GB-seconds of compute time per month from AWS, and 10,000 PostgreSQL rows from Heroku for free.

Want to skip to the finished code? See mattwelke/serverless-managed-db-examples.

To help with deploying the Lambda function, you can use Serverless Framework. This automates much of the steps needed to deploy a Lambda function, as long as you’ve got the AWS CLI installed and configured. You’ll use Node.js in particular for this tutorial, but the approach to connect to Heroku Postgres will work for any language supported by AWS Lambda. Install the Serverless CLI with the following command:

Run the following command to create the app in the ./my-service directory:

You should see output similar to:

All future sls commands in the tutorial will be run from the app directory.

You’ll notice the serverless.yml file has many comments. You can delete the comments. After doing so, the file contains the following:

You’ll be editing handler.js. The JavaScript function created for us looks like this:

Run the sls deploy command from the app directory. You should see output similar to:

Behind the scenes, the AWS SDK was invoked to manage every AWS service needed to deploy the hello function. However, because the template only defined a Serverless Framework function and not a Serverless “event” for it, there was no configuration of API Gateway done to set up the function for HTTP access.

Change serverless.yml to the following:

Then, run the sls deploy command again and observe that an endpoint will now be available for your function. The deploy command’s output will be similar to:

At this point, you can hit that endpoint in your browser and see a JSON response. If you do, then your setup is working and you can continue with the tutorial. ✔️ If you don’t, and you get an “internal server error” response, check CloudWatch’s logs for a log stream corresponding to your Lambda function to learn why your function didn’t execute properly.

You must have a Heroku app created to be associated with the Heroku Postgres service you will use. Create your Heroku app and choose the United States region, which will put your database geographically near the AWS region used to deploy your functions: 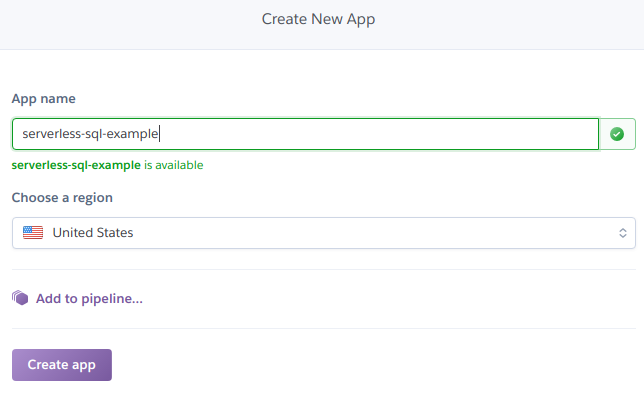 You now need to create the Heroku Postgres resource. On your app’s “Resources” tab, under “Add-ons”, type postgres and when “Heroku Postgres” appears as an option, select it:

In the modal that appears, select “Provision” with the free tier selected: 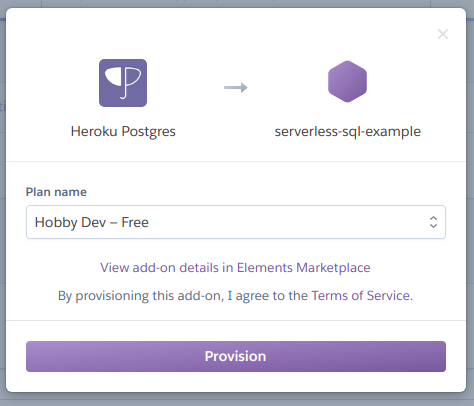 Click on your “Heroku Postgres” that appears in the list, and you’ll be brought to a screen with statistics such as the number of active connections and rows in the database right now. Click on the “Settings” tab and then the “View Credentials…” button. The credentials will be displayed. Note the following information which you’ll insert into the function source code next to connect to the database:

Run the npm install pg command to install the PostgreSQL client NPM module so that the function can use it. Replace handler.js with the following code. Replace the credentials in this example (which I’ve since rotated out - don’t worry!) with the credentials for your Heroku Postgres service:

There are a few points to explain in this code:

Run the sls deploy command again to deploy these changes, and visit the endpoint in your web browser. You’ll get a response like:

You’ll also notice that there is now a connection open to your Heroku Postgres service (though, of course, no rows or tables yet) if you visit your Heroku dashboard:

The only remaining issue is to deal with the fact that every now and then, the Heroku Postgres credentials will change because heroku regularly rotates them. This is by design. A Heroku app will handle this automatically because the DATABASE_URL environment variable that Heroku provides their apps is updated with a new value and the Heroku app is restarted. Since Heroku can’t automatically restart your Lambda function backing containers, you’ll need to handle this yourself.

There are multiple ways to deal with this problem, but here’s a simple solution, where instead of configuring the Lambda function with Heroku Postgres credentials, you configure it with a Heroku API key capable of fetching the Heroku Postgres credentials. When the Lambda function’s backing container starts, it will perform a request to the Heroku API to fetch the credentials, and then use them to create the connection pool.

You will need a Heroku API key to do this. You can create a token specifically for this app using the Heroku CLI, or you can grab the API Key associated with your account by going into your account settings on the dashboard and noting the “API Key”. You will also need to note the ID of your Heroku Postgres service, available in the Heroku dashboard. For example, my app’s Heroku Postgres service is postgresql-silhouetted-50650.

Change handler.js to the following, including your Heroku API key:

Note that creating a PostgreSQL connection pool is now an asynchronous operation, because a request must first be made to the Heroku API, so the async keyword is added to the setupPgPool function, and the function is called with await.

You may notice a bit more cold start time with this change, because creating the database connection pool takes longer, but this shouldn’t be too bad in the long run compared to other factors that can increase Lambda function cold start time such using too many NPM libraries and using an AWS VPC (though that’s changing).

Your web app is ready to go into production once you take care of hiding your Heroku API key in an environment variable so that people seeing your app’s source code won’t gain access to your Heroku account.

Examples and Other Cloud Product Combinations

The completed code for this tutorial can be found in the mattwelke/serverless-managed-db-examples GitHub repository in the aws-lambda-heroku-postgres directory.

One reason I like the idea of this particular pairing of FaaS product and managed database product is that if you can’t afford an extensive DevOps team, you get so much for your money. AWS and Heroku aren’t paying me to say this - I just think it makes sense. AWS Lambda will scale considerably high before billing kicks in. When you want more than 10,000 PostgreSQL rows, you can get 10,000,000 rows for USD$9/mo. Later, you can bump it up to “4 GB RAM, 64 GB storage, 120 connections” for USD$50/mo. Complete plan details can be found here. Unless you’re running a big data type system, and as long as you’re using object storage products like AWS S3 instead of storing binary data in the database, that’s more than enough to build something great.

If a provider allows you to host the managed database in a particular cloud, this also gives you the option to work with other FaaS products like Google Cloud Functions, Azure Functions, or IBM Cloud Functions, because you’ll be able to run the FaaS product and the managed database geographically close to each other to achieve good performance. Check out the other directories in the examples repository to see them. Note that any credentials you see hard-coded in this tutorial or in the examples repository are rotated out and will not work for you.